“When I start to paint it creates a fusion between me and the canvas, which becomes the mirror of my soul. In fact, the paintings collect the echoes of fantastic worlds, and are the result of moments of joy, harmony as well as pain, sufferings, interrogations without answers: apparently they are without any human subject, but actually they collect a countless multiplicity of them. The canvases are nothing else to me, that’s why they are never finished”. 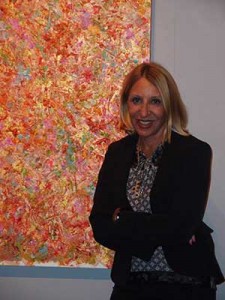 Cinthia Pinotti was born in Rome in a family originally from Florence. After the graduation from classical high school followed by the degree in law at the University of Rome “La Sapienza” in 1979 she started practicing law.
In 1988 Cinthia won the juridical contest in the italian Court of Auditors (Corte dei Conti) where, since 1992, she performs as the Deputy Attorney General.
In 1996 received the Lectureship Award of Jean Monnet in European Commercial Law at the University of Tuscia in Viterbo and since 2008 she holds the position of Professor of Administrative Law at the Pontifical Lateran University.
An eclectic jurist mainly concentrated on EU laws, Cinthia is known to be sensitive to social issues of justice. Moreover, she has always cultivated multiple interests in the literary and artistic field. Self-taught, she practiced painting in the 80s.

Starting from 2008, after a long break and many years of dense institutional and academic commitments, she came back to widening an interior space inside herself and an intense artistic self­­-expression in the form of informal oil painting, highly tactile, realized through the colour, as a free projection and manifestation of emotions and instincts that soar beyond the limits of the paintings.

It’s an emotional and instinctual painting, made with the spatula, in which there is no project but the need to express in a direct way on canvas, the complexity of yourself through paintings that do not deny the reality that can be expressed, but to elaborate it, transform it and expand beyond the limits of time and space.

The paintings reveal a deep connection between the sensitivity of the jurist and of the artist: in both there is a need to overcome the limit, the finite, an impossible aspiration of fulfilment  that contrasts with the perennial changeability of human affairs.

In January 2015, she held her first personal exhibition in the Brasini wing of the Complesso del Vittoriano in Rome. The exhibition’s title was “Il colore del sé” (“The color of self”) that has been cured by Prof. Claudio Strinati.